Somewhere between a lot, and most of the dominant flavours in whiskey come from the wood it has spent time in.

There are countless nuances in how that wood effects flavour, from the straightness of the tree or fineness of the grain to the size of the barrel or depth of the char.

Two of the main factors in how we choose our wood are: the breed of oak (where the wood is from), and the predecessor liquid (if it's a pre-loved barrel, what's been in it).

As with most Irish whiskeys, ours matures in Bourbon barrels. But where we break with tradition is that we finish all of our whiskeys in a second, very different cask. These are selected especially to accentuate the flavours already inherent in a given whiskey. 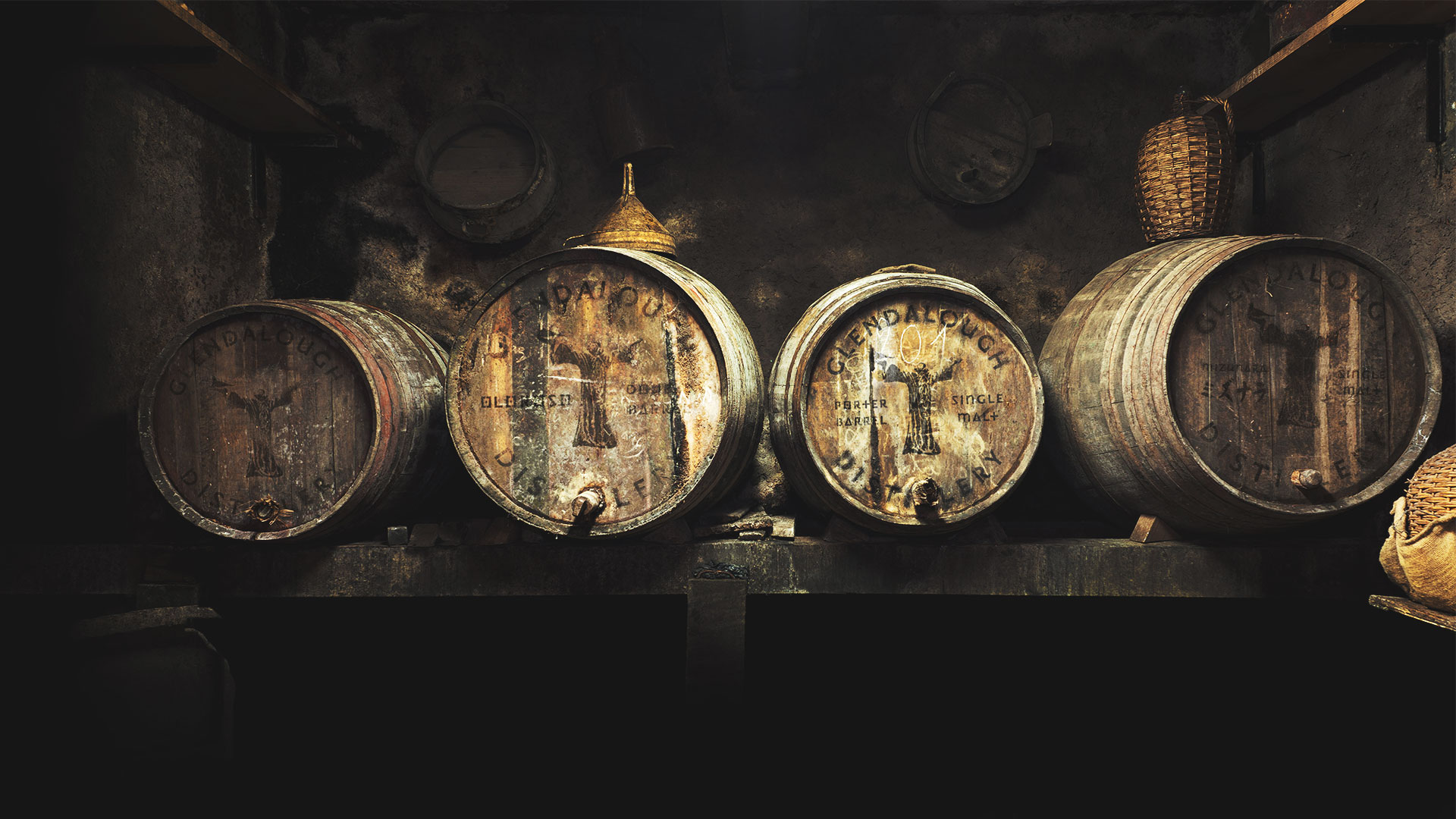 As mentioned, our whiskeys do the bulk of their time in first-fill American white oak Bourbon barrels. These 200 litre casks lay the flavour foundation that has become the backbone of the Irish whiskey taste.

Felled in Missouri at about 80 years old, they are milled, seasoned and coopered in Kentucky and filled with Bourbon.

American oak casks impart a lot of flavour. Besides the fact that they've held Bourbon before we get them, the charred wood truly transforms new-make Irish whiskey. We use a level 4 "alligator char" which really brings the wood alive in terms of flavour.

This adds that charcoal mellowness, the sweetness of vanilla and caramel that perfectly compliment the flavours already present in the spirit. They bring to the whiskey a beautiful golden hue, and smoothen it to a creamy mouth-feel.

However we're always seeking out new flavours, the best oak around the world and other interesting casks.

To finish our Double Barrel, we use 500 litre Oloroso sherry butts made from European oak, felled in the ancient deciduous forests of Northern Spain. A tree must be about 120 years old before it's good for barrel making.

The casks are lightly toasted rather than charred. So we get clearer wood flavours. Then there's the Oloroso. A dark, fruity and nutty fortified wine from Montillo, Spain, the Oloroso that seasons our casks is made from the famed Pedro Ximenez grape. After about 2 years of holding Oloroso, we then inspect and choose the casks.

The intense flavours they bring get into our whiskey fast. Raisins, sultanas, candied peel, cinnamon, nutmeg, and Christmas pudding are all clearly discernible in the whiskey within 6 months, as the liquid turns from gold to amber.

For our 7 year old single malt, it's Dublin porter barrels. Although these barrels are also ex-bourbon, they become a different beast once craft porter spends a year in them.

We use barrels from the 5 Lamps brewery in Dublin. Their "Black Pitts Porter" is a rich, black beer with deep, dark flavours. Made with chocolate malt and roasted barley, the porter is rich and creamy with complex aromas and a smooth velvety texture.

All of this gets into the oak and comes back out into our whiskey to accentuate the robust malts of both liquids. Flavours of cocoa from the porter mix with the citrus notes of the whiskey to result in dark chocolate orange flavours, with toffee and even coffee notes on the finish. It's an unusual and noticeably different whiskey, that you want to return to, often.

For our 13 year old single malt, it's the legendary Mizunara oak. Found in forests on the rugged, volcanic island of Hokkaido, the wood is very soft and porous with a tight grain, which is good for flavour but hard to cooper and prone to leaking. It has very high levels of vanillins that impart luxurious woody flavours fast.

Ours is then brought to the south of Japan to air dry in Miyzaki before coopering at Japan's only independent cooperage. Here we personally inspect the wood before it's worked by Japan's oldest cooper. The casks are lightly charred and shipped as virgin barrels over 6,000 miles to us.

Mizunara packs a punch of unique, exotic and exquisite woody flavours. Some say sandalwood, we'd agree, but that's just the beginning. It amplifies flavour and brings the mouth-feel to velvety proportions, it layers on extra vanilla, honey and even coconut.

It makes for a pretty unique take on Irish whiskey

Probably the rarest of all casks is Irish Oak. Before Ireland was known as "the emerald isle", it was known through out the old world as "the wooded isle". They say a squirrel could cross the whole country touching nothing but oak.

In particular, Glendalough oak was famed for boat building as far back as Viking times (The largest Viking ship ever built was "The Sea Stallion of Glendalough"). Even the mountains that cradle the valley are named for the oak forests that covered them - Camaderry Mountain (Sliabh Céim an Doire, meaning "the mountain pass of the oak wood") and Derrybawn Mountain (Sliabh Doire Ban, meaning "the mountain of white oak")

We're very excited and proud to play a part in bringing Irish oak back into use for aging Irish whiskey, helping to manage these ancient forests, and doing our bit for the regeneration of these beautiful, broad-leaf, deciduous woods. For every one tree we felled, we replanted seven.

We sourced these Irish oak trees from within walking distance of the distillery to get to a truer taste of Wicklow into the Whiskey. The Irish oak amplifies the flavour of the bourbon cask-aged Pot Still liquid while adding layers of sweetness and bready, woody, earthy notes.